There are many sizes of cylindrical lithium-ion (Li-ion) cells, and the number of sizes continues to grow. Some are optimized for use in simple devices such as toys and flashlights; others are mainly found powering portable electronics and electric vehicles. This FAQ begins by reviewing the broad landscape of cylindrical Li-ions, including protected and non-protected cells for various applications. It then digs more deeply into a comparison of today’s two most common formats, the 18650 and 21700. It closes looking into the future, including larger formats and improvements in cell and pack construction techniques leading to the development of premium-performance energy storage systems.

Various cylindrical Li-ion batteries are offered in protected and unprotected packaging. Most electronic equipment, electric vehicles, and other commercial applications favor unprotected batteries due to their higher capacity ratings and lower prices; in these applications, the battery protection is built into the system, not the battery.

Consumer batteries are offered in both protected and unprotected styles. Protected batteries are safer to use in simple devices such as flashlights and toys (Figure 1). Common battery protection elements protect against excessive currents and overheating high internal pressures, and overvoltage conditions and include:

Common sizes of cylindrical Li-ions include:

Cylindrical cells are produced using wound electrodes. That has the advantage of faster production compared with various stacked and pouch formats. Cells such as the 18650 and 21700 are wound jelly roll formats that have the shape of an Archimedean spiral. The periodic distance between the windings is the jelly roll is dascs, and is a key parameter determining the performance of the cells. In these cells, dascs, is the sum of the thicknesses of the cathode and anode (both double side coated), and twice the thickness of the separator (Figure 2). Cell resistance and heating characteristics are directly related to dascs. Higher dascs values result in higher maximum temperatures during full discharge. Figure 2: Archimedean spiral (a) and example of the periodic winding distance (dascs) in the jelly roll structure of cylindrical cells (b). (Image: Journal of Power Sources)

As a result of the greater quantity of active materials, 20700 cells have an increased capacity of over 0.9Ah, and 21700 cells have an increased capacity of about 1.35Ah compared with 18650 cells. Increasing cell size results in a better ratio of energy-storing versus non-energy storage materials. Using even larger formats such as the 22700, 25700, and 30700 formats is expected to result in a capacity gain per high-energy cell of 1.8 Ah, 3.1 Ah, and 5.8 Ah, respectively, compared to the 18650 (Figure 3). 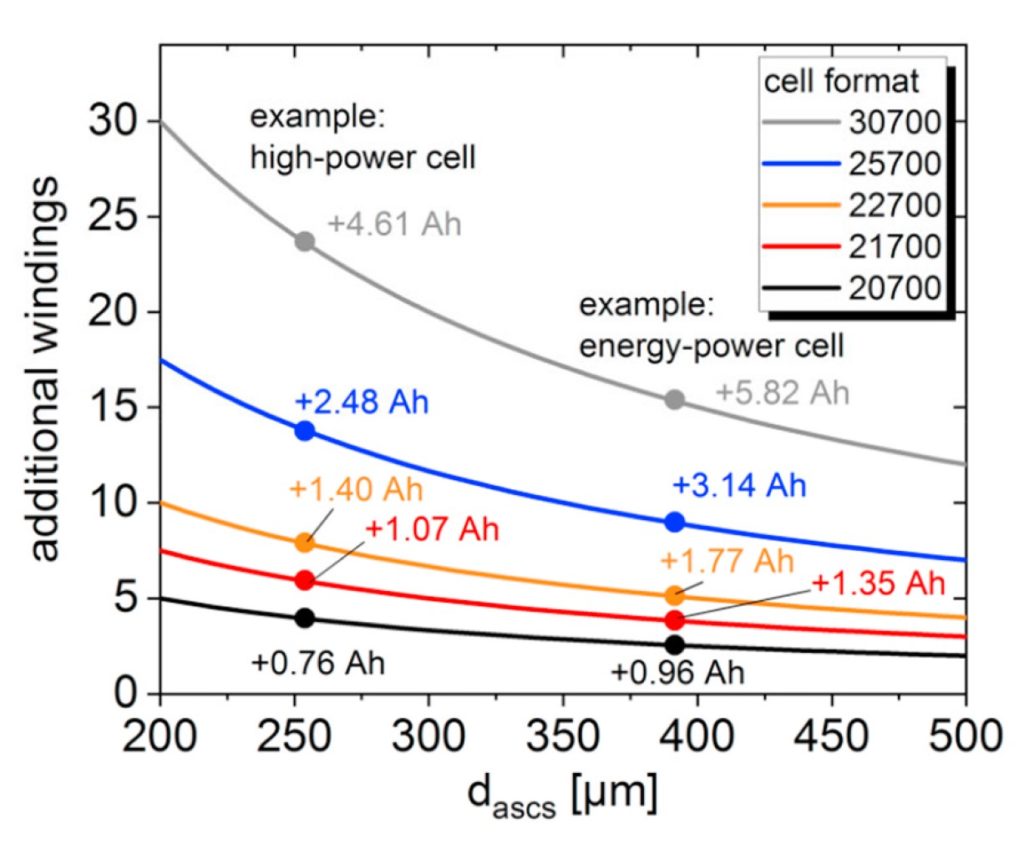 Figure 3: Additional windings in the formats 20700 to 30700 produce higher capacities and energy densities than the 18650. (Image: Journal of Power Sources)

Some of the similarities and differences between the 18650 and 21700 include:

As designers move from 21700 cells to larger 25700 or even 30700 cells, pack costs are expected to shrink due to needing fewer cells to store a given amount of energy. For example, moving up from 18650 cells to 21700 cells means that one-third fewer cells will be needed to obtain the same total energy storage (Figure 4).

Figure 4: 33% fewer cells are required per pack are needed per Wh when using 21700 cells compared to a pack using 18650 cells. (Image: Journal of the Electrochemical Society)

Fewer cells mean that the battery management system (BMS) for a pack consisting of 21700 cells will need to monitor one-third fewer cells, reducing complexity and cost. The percentage of space in the voids between the cells will be about the same for a pack of 18650 and a pack of 21700 cells. As a result, the amount of cooling liquid in the voids will be similar, and the total pack volume per Wh will also be similar. Of course, a pack using 21700 cells will be at least 5mm higher compared with the equivalent energy storage using 18650s, so simple retrofitting will not usually be possible.

According to Tesla, the still under development 4680 cell promises further increases in performance, including 5X the Whrs and 6X the Watts, to deliver 16% more driving range than 21700 cells. The 4680 is not just a larger cell; it includes a new “tabless” electrode design.

As cylindrical cells get larger and larger in diameter, the heat dissipation at the core becomes worse. The new “tabless” design transfers heat axially through the aluminum and copper current collectors to the bottom of the cell, enabling efficient bottom-side cooling of a battery pack and ensuring more even temperature profiles inside individual cells (Figure 5). Improved thermal management is expected to support faster charging and discharging. 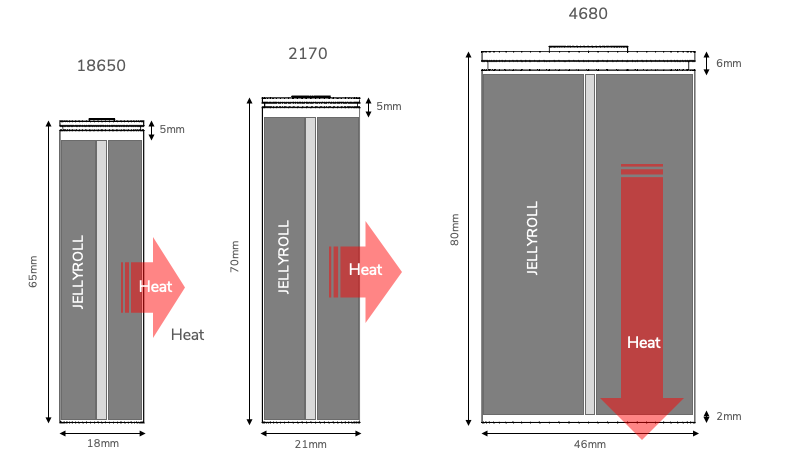 Like the proposed 4680 cells, the packs of 21700 cells designed for power tools use improved packaging to deliver increased performance. For example, a standard 18V battery using 18650 cells can produce up to 800 W of power output. The newer packs based on 21700 cells can produce up to 1,440 W, an 80% increase. As noted above, the 21700 inherently has about 50% greater capacity and energy density than the 18650 for discharge rates up to about 3.75C, so where does the added performance come from?

It’s the packaging. The 21700 packs use welded cell connectors, copper endplates, and power rails to reduce the resistance in the packaging. In addition, improved thermal management transfers about 20% more heat out of the cells. The net result is that runtime gains up to 100% compared with 18650 packs and delivers 80% more power.

The combination of 21700 cells and the improved packaging technology results in premium performance battery packs that enable new applications beyond portable power tools. Electric power equipment for landscaping and lawn care, battery-powered construction equipment, and high-capacity battery-powered portable inverters are coming onto the market using these premium battery packs. And the higher added value of the premium packs supports the addition to more features such as smart packs that include built-in microprocessors and Bluetooth communications that can be used to enable password control of the packs, enhancing security, users can set notifications, and remotely check battery status.

There’s an expansive and growing selection of cylindrical Li-ion cells that designers can use for specific applications. Each of the many options delivers performance tradeoffs, and some are available in protected and unprotected models giving designers an even wider selection. In the future, larger cell formats are expected to supplant today’s 18650 and 21700 to deliver higher performance. Improvements in cell and battery pack construction are contributing to the development of premium performance energy storage systems.

18650 vs. 21700 Li-ion cells – A direct comparison of electrochemical, thermal, and geometrical properties, Journal of Power Sources
Energy Density of Cylindrical Li-Ion Cells: A Comparison of Commercial 18650 to the 21700 Cells, Journal of the Electrochemical Society
Safety Limitations Associated with Commercial 18650 Lithium-ion Cells, NASA
Tesla Battery Day, Enpower
What is the Difference Between “Protected” and “Unprotected” 18650 Batteries?, Fenix