A lithium-ion capacitor (LIC) is a type of supercapacitor. It’s a hybrid between a Li-ion battery and an electric double-layer supercapacitor (ELDC). The cathode is activated carbon, the same as is found in an ELDC, while the anode consists of carbon material pre-doped with lithium ions, similar to those found in Li-ion batteries. LICs are asymmetric devices, while double-layer capacitors and pseudocapacitors have symmetrical structures. The asymmetric structure of LICs results in a series of performance tradeoffs compared with ELDCs, pseudocapacitors, and Li-ion batteries. Pseudo capacitors, double-layer capacitors, and hybrid capacitors are defined based on their electrode designs. (Image: Wikipedia)

Like many other energy storage technologies, LICs have four components, an anode, a cathode, an electrolyte, and a separator. The anode of the LIC is the negative side and is the Li-ion battery element. It operates based on an electrochemical reaction and is charged using the reversible intercalation of lithium ions. But it is not strictly speaking a Li-ion anode. A LIC anode is a hybrid structure within the hybrid supercapacitor.

Most of today’s LICs use a modified version of LTO (Li4Ti5O12) because of its high coulombic efficiency, stable operating voltage, and insignificant volume alteration during lithium intercalation and decalation. It has to be modified because basic LTO has poor li-ion diffusivity, low electrical conductivity, and lithium-ion diffusivity. The anode in a LIC is a modified version of the anode in an LTO battery. It is fabricated using nanostructured metal oxides with a high specific surface area to increase the capacity of the anode. Depending on the design and manufacturer, nanotubes (single- and multi-walled), nanoparticles, nanowires, and nanobeads are used to enhance the power density of the LIC anode.

The anode of LIC’s is often pre-lithiated (doped) to prevent the anode from experiencing a large potential drop during charge and discharge cycles. Doping the anode lowers the anode potential and leads to a higher output voltage of the capacitor. Typically, output voltages for LICs are in the range of 3.8V to 4.0V but are limited to minimum voltages of 1.8V to 2.2V. Conventional ELDCs and pseudocapacitors can be discharged to zero volts without damage. When a LIC comes near its maximum or minimum voltage, the electrolyte and electrodes start to degrade. This will irreversibly damage the device. 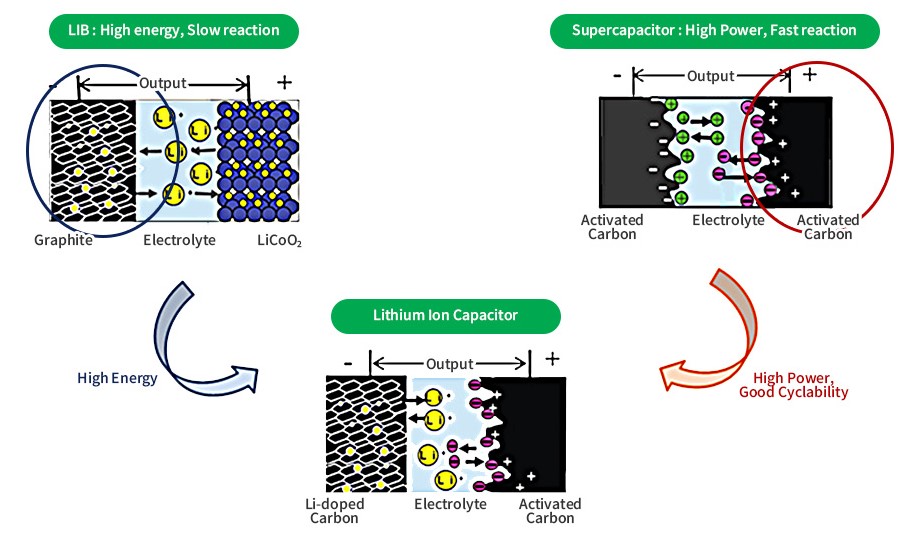 An electric double layer is used to store energy in the cathode of a LIC. The cathode must have good conductivity and a high specific surface area. Activated carbon has been used as an anode material in LICs, but various materials have been developed in newer designs that improve performance. Depending on the product and manufacturer, four types of cathode materials are used in LICs; heteroatom-doped carbon, graphene-based, porous carbon, and bifunctional cathodes.

The use of an LTO-like anode combined with the electrical conductivity and ionic diffusivity of various carbon-based cathode materials enables the unique performance capabilities of LICs. The reason that degradation is more of a concern for the anode is that the anode employs an electrochemical process while the cathode operates strictly on electrostatic principles.

In addition to the anode and cathode, nearly all energy storage devices include an electrolyte and a separator. LICs are no exception. High ionic conductivity is needed, often non-aqueous electrolytes that won’t react with lithium. A lithium-based salt solution can be used that is very similar or identical to that use in Li-ion batteries.

LIC separators are similar to those used in Li-ion batteries. They are chemically inert and provide electrical insulation between the anode and cathode but allow ions through to support LIC operation.

LICs have higher operating voltage (3.8 V maximum), up to 10X higher capacitance and energy density, and lower self-discharge than symmetric supercapacitors. Symmetrical supercapacitors have lower ESRs and can deliver higher power levels, and they can be fully discharged to zero volts giving them higher energy storage capabilities in some cases. LICs have much lower leakage currents and can hold a charge for longer periods. Unlike Li-ion batteries, LICs and other supercapacitors have voltages that vary linearly based on the state of charge. Electronic power converters are needed to provide stable voltages for system operation. Due to their asymmetric construction, the capacitance of the anode is several orders of magnitude larger than that of the cathode. During charging and discharging, the change of the anode potential is much larger than the change in the potential at the cathode. The use of LICs requires a cell management system (CMS). The CMS needed by LICs is much simpler than the battery management system used with Li-ion batteries. A supercapacitor CMS is needed to maximize the life of the device. In LICs, the CMS is used to stop discharging at about 2.2 V and keep the cell voltages equal in designs where multiple cells are connected in series. Battery management systems, on the other hand, are there to ensure safe operation.

For example, power outages, lasting from a few seconds to several minutes, may cause damage and loss of production in some industrial processes that are sensitive to short-duration downtimes, such as chemical or semiconductor processing. LICs can be used to design high-power, compact and rugged backup power systems that can be placed in industrial environments. For example, an 80-kW industrial UPS has been built based on LIC modules. The system provides a backup time of two minutes in a compact footprint. Performance features of the LIC UPS compared with the use of lead-acid batteries include:

LICs are a type of supercapacitor. They are a hybrid between a Li-ion battery and an ELDC and provide a third energy storage alternative that delivers higher power density than Li-ion batteries and higher energy densities than conventional supercapacitors. LICs are more rugged than Li-ion or lead-acid batteries and do not have the safety or environmental concerns associated with rechargeable batteries. In addition, the cell management systems needed with LICs are simpler to implement compared with the battery management systems needed by Li-ion and lead-acid batteries. Their unique combination of performance features makes LICs useful in various applications, including wind power generators, uninterruptible power systems, voltage sag compensation, photovoltaic power generation, and regenerative energy recovery in electric vehicles and industrial machinery, including robots.