Rare earths play an important part in the sustainability of electric vehicles (EVs). While there are sustainability challenges related to EV batteries, rare earths are not used in lithium-ion batteries. They are necessary for the magnets that form the main propulsion motors. The batteries mostly rely on lithium and cobalt (not rare earths). At the same time, the magnets in the motors need neodymium or samarium and can also require terbium and dysprosium; all are rare earth elements. The most common rare-earth magnets are the neodymium-iron-boron (NdFeB) and samarium cobalt (SmCo).

They are relatively abundant in the earth’s crust but are “rare” because they occur in relatively low concentrations compared with the ores for other metals. Metals like iron, gold, silver, copper, and so on can be found in high concentrations in ores. While rare earths don’t occur in ores like other metals, their overall availability is 3x that of copper, 2x compared with zinc, and 200x more abundant than platinum or gold.

But their low concentrations make them much more difficult to acquire than other metals. And they are relatively difficult to separate from each other and from the ores in which they occur. The difficulty in mining and refining rare earths presents problems related to environmental damage and sustainability. 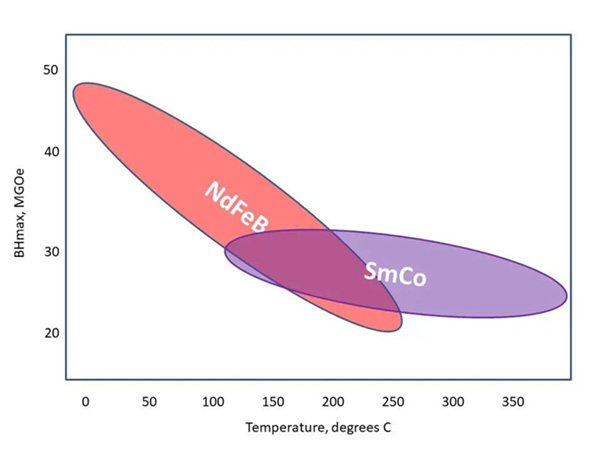 SmCo magnets are better suited for applications with heavy loads or that operate at elevated temperatures like:

Stepping away from rare earths
High coercivity and the ability to maintain magnetization, even at elevated temperatures, is needed in EV motors. In many instances, about 30 percent of the materials used in the magnets in EV motors are rare earths. To improve the high-temperature operation of Nd magnets, terbium (Tb) and dysprosium (Dy) are added. Unfortunately, Tb and Dy are very expensive and are subject to severe supply chain risks.

To address those concerns and performance needs, Toyota has developed a new Nd magnetic material that uses no Tb or Dy. In the new material, part of the Nd is replaced by lanthanum (La) and cerium (Ce), relatively low-cost and more widely available rare earths.

Toyota significantly reduced the use of Tb and Dy in the fourth-generation Prius motor. The recent development not only eliminates the use of Tb and Dy but also reduces the amount of Nb needed and replaces the Nb with La and Ce (Figure 3). The new material is more sustainable and is expected to be used across a similar range of applications as the Nb material it replaces.

Figure 3: Toyota has reduced the use of rare earths in neodymium magnets over several generations of materials development. (Image: Toyota)

Cosmic magnets
Researchers at the University of Cambridge are taking a different approach to eliminate rare earths. They are developing an industrial-scale process to make tetrataenite, an iron-nickel alloy with magnetic properties approaching those of rare-earth magnets (Figure 4). Natural tetrataenite forms in outer space in a meteorite as it slowly cools over millions of years. The long cooling time gives the iron and nickel atoms time to order themselves into a specific stacking sequence that supports the fabrication of high-performance permanent magnets without any rare earths.

Figure 4: Sample of Tetrataenite that promises to enable high-performance magnets without rate earth elements for wind turbines and EVs. (Image: University of Cambridge)

The long cooling time nor the stacking sequence makes it impractical to produce tetrataenite on a large scale. The recently proposed fabrication method involves the addition of phosphorous in the right proportions to the iron and nickel matrix. The new formulation speeds the formation of tetrataenite by up to 15 orders of magnitude, enabling it to be produced in a matter of seconds instead of millions of years. The material is now being characterized to determine how its performance compares with NdFeB and SmCo rare earth magnets and to refine the fabrication process further to make it suitable for industrial-scale operations.

MnBi-based permanent magnets
Another proposed alternative to rare earth magnets is manganese-bismuth (MnBi) based permanent magnets. Researchers from the Department of Energy’s Critical Materials Institute and Ames National Laboratory are developing a new method of fabricating MnBi magnets based on microstructure engineering. MnBi is a potential material for high-temperature magnets because of its increasing coercivity (H) with increasing temperatures up to 255 °C.

In general, the H of a permanent magnet is always lower than that of the material used to make the magnet due to defects introduced during sintering or other powder consolidation processes. For most materials, the reduction in H is not significant, but for MnBi, up to 70% of H is lost during powder consolidation.

The H of a MnBi bulk magnet is controlled by the structure of the magnetization domains, and the large H loss experienced during the powder consolidation process can be attributed to the inter-grain magnetic coupling. To realize a high H, the grains in the MnBi bulk magnet must be separated with a non-magnetic grain boundary phase (GBP). The research team engineered precise nanostructures by controlling the grain size, tailoring the GBP, and improving grain alignment. Those enhancements resulted in greatly improved magnetic properties, including H for MnBi magnets. Further development work is being undertaken with PowderMet, Inc. to design a commercially viable and large-scale process for fabricating high-performance MnBi permanent magnets.

Summary
NdFeB and SSmCo-based rare earth magnets are important components in EVs and a range of industrial, commercial, and military-aerospace systems. They are significantly higher in performance compared to alternatives without rare earth content. The use of rare earths is fraught with concerns relating to supply chain security, environmental damage, and sustainability. As a result, numerous efforts are underway to develop alternatives to rare earth magnets with similar performance levels.